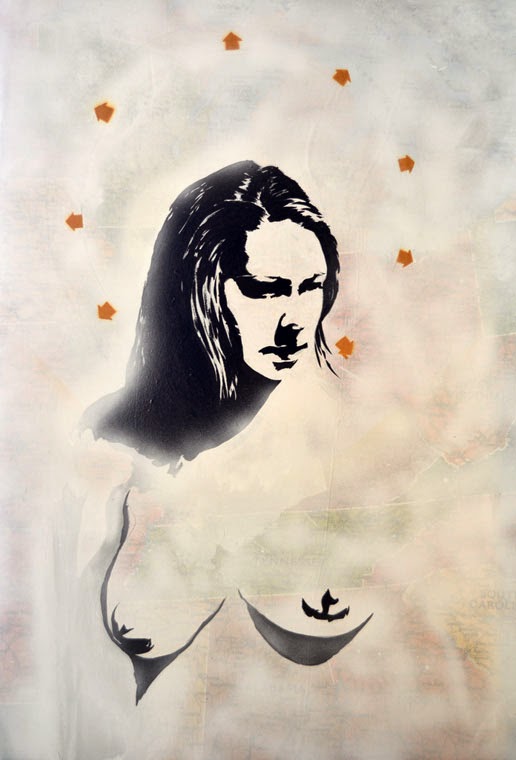 In January, I was invited to participate in a group art show with the theme, No Place Like Home.  The only requirement was that each piece had to contain a house.  The house could be any size, shape or design. Without impetus to work large or develop fully realized pieces, I spend my time working on studies in sketchbooks or on newsprint.  This opportunity arrived at a perfect time.  It gave me motivation to create large, completed pieces.

I enjoy working with a constraint.  It provides a challenge and funnel to channel ideas.  However, I struggled with the house theme and am unsure why. I didn't want the house to feel forced.  It had to appear organic. But after a few weeks of having "house on the brain," I erupted with all of these ideas.  I wasn't sure if any of them would work but I ended up developing six pieces with different styles and ideas.  It was fun to explore. Two of the pieces were included in the show, with the piece above, Life Is Elsewhere, being one of them.

When I look out the airplane's window, I find myself constantly wondering how my life would be different had I grown up in the locales revealed below me.  Would I be essentially the same?  Wildly different?  Would my life be better?  Worse?  What experiences would I have had?  I'm fascinated by the concept.

There is a quote by Arthur Rimbaud: What a life! True life is elsewhere. We are not in the world.

This became the basis of Milan Kundera's novel titled, Life Is Elsewhere.  Another novel called, Prague by Arthur Phillips, developed a similar concept.  The idea is that we think our life would be better if we only lived over there.... or people in this other place are having so much more fun than I am.  It's that something is better somewhere else.

I decided to explore this in my piece.

I purchased a paper map of the United States and mounted it to Masonite using matte medium.  It becomes an adhesive when paper is placed on top of a wet layer.  When applied on top of paper, it dries clear and can be used as a base for either water or oil based mediums.  I started by airbrushing white ink on top of the map.  Coincidentally, this made it appear as clouds, very similar to when I fly in a plane and look out the window.  Little patches could be seen here and there.

I won't go into reasons why I added and arranged the specific elements as I did -- that will be up to the viewer.  But to explain the technical process... the figure was hand-drawn on tracing paper and transferred to the map using carbon copy.  I tried drawing on the map directly in pencil but it was too faint to read.  The carbon copy method allowed me to perfect the drawing on the tracing paper and transfer dark lines to the map.  I inked the figure using a Winsor and Newton Series #7 brush.  I airbrushed white ink over top to soften the edges.  I cut a template for the golden symbols and airbrushed them using Daler-Rowney Raw Sienna acrylic ink.  I went back over them with a brush using opaque Gold acylic ink.
Posted by Bryan Tipton at 10:21 PM
Labels: airbrush, illustration, ink, map, painting