All portraits are conte pencil on newsprint and were drawn from a live model in a little under two hours. 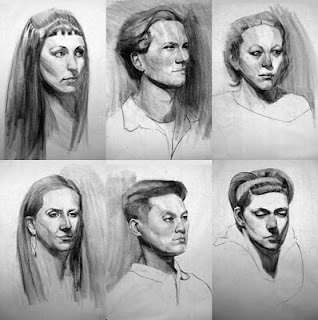 Posted by Bryan Tipton at 8:20 PM No comments:

The Life Benefits of Deconstructing a Lemon.

When I graduated college and moved to California, I faced the challenge of furnishing my new apartment. Growing up, we had the television in our living room. I never inquired about its origins. Never analyzed it. I never thought about the qualities of a TV because I never had to. It was just there, purchased with money that wasn’t mine.

I had to buy a television for my new apartment. I walked into the big chain store and was confronted by a wall of twenty indistinguishable twenty-five inch televisions all playing the same benign show. I had to differentiate one from another even though they all seemed remarkably the same. I was forced to think of televisions as qualitative objects with pros and cons because I was now invested in the outcome. I deconstructed them. Pulled them apart. Dissected their specs. Prioritized features. Compared and contrasted. Asked myself questions. Acknowledged nuance and subtlety.

The scene repeated itself when I wandered over to an endless field of identical looking vacuums.

One of the things I love about painting? It forces me to view and understand everyday objects in new ways.

In my still-life class, I stared at the lemon. When you were a child learning colors, the teacher held up flash cards. Yellow was represented by a lemon. Orange was represented by, well… an orange. Now, when I was painting a lemon, I had to ask myself, “I know that it’s yellow, but what kind of yellow?” I used yellow for the base but found myself adding transparent maroon and ultramarine blue (Blue? Yes, blue).

In my life, I’d eaten watermelon a hundred times. I knew the inside was red, but I had to ask myself, “What kind of red?” I didn’t have a tube of paint labeled watermelon. I had to carefully observe, and then deduce and concoct the color from the fifteen orphaned gobs of paint scattered across my palette. 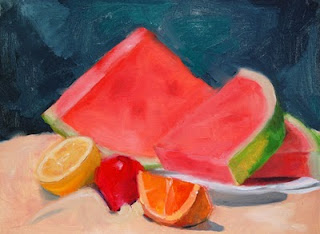 On my next trip to the farmers’ market, it will be difficult for me to encounter a pile of lemons and not analyze what I see. I will examine the subtle change in chroma as the lemon’s form rolls from light into shade.

It’s easy to dismiss art. Say that it’s irrelevant. A waste of time. Boring. I understand that people feel this way (although I think they’re wrong). In my life, I tend to take things at face value. I don’t extrapolate. But I’ll say this: Art changed the way I see things. I appreciate subtleties I would have otherwise missed. It makes my life richer. It's a new way of seeing.

It’s the difference between riding on a train through the French countryside with your eyes looking out the window, or tilted down towards your feet.
Posted by Bryan Tipton at 11:20 AM No comments: 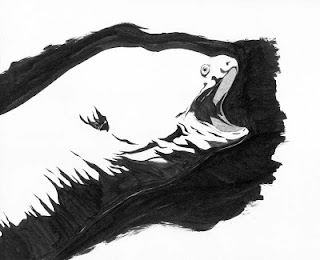 Ink study for a possible oil painting. For reference, I used pictures I took of a Moray eel at the nearby Chula Vista Nature Center.
Posted by Bryan Tipton at 7:18 PM No comments: 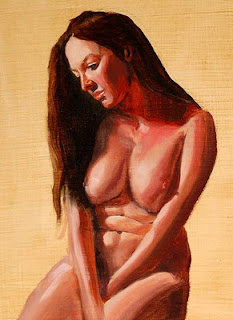 This is an oil study I worked on over the weekend. I feel like I did a good job capturing the mood and posture of the model. Values are decent. I need to work on the color -- it's much too warm.
Posted by Bryan Tipton at 9:32 PM No comments:

I Felt The Earth Move.

There are certainly better places to be during a 7.2 earthquake than the soda aisle of a grocery store. Most often, earthquakes pass unnoticed beneath your feet. Not this time, as the burdened shelves swayed dramatically. An interesting experience.

Posted by Bryan Tipton at 5:02 PM No comments:

I designed a rock poster for my brother's band, Throwing Toast. It can become an overly ambitious goal, but I try to embed some semblance of a narrative into each poster design. All of the images were created with brush and ink. The text was added later with Photoshop. 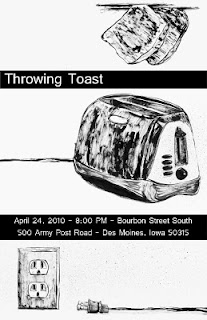 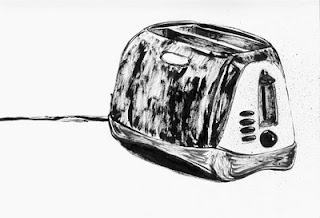 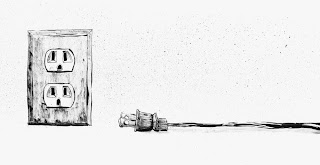