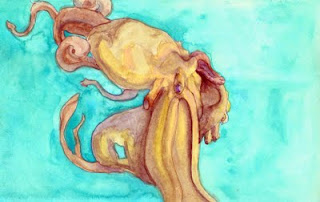 I'm taking a Head/Figure/Quick-Sketch combination class this term at , taught by Lucas Graciano.  It's been over three months since I last picked up the Conte 1710B pencil.  I was worried about the ramp-up time due to its idiosyncrasies -- but it hasn't been too bad.  Generally speaking, I feel like my draftsmanship is good, so my focus this term is working on shape design and nuance.  Those are tough things to learn because they can't necessarily be taught.  To help, Lucas recommended that I do some master studies this term.  I'll pick out a few artists I admire and work on those over the summer.

Here are my first two weeks of class.... Each was drawn from a live model in a little under two hours. 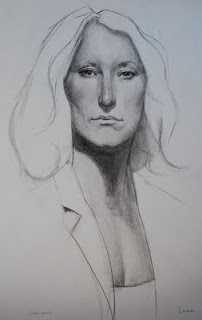 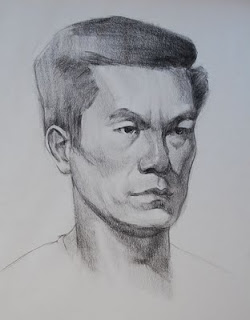 Posted by Bryan Tipton at 1:16 PM No comments:

One of my favorite places in San Diego is Newbreak Coffee Shop in Ocean Beach.  Located along the beach, it's a welcoming environment with incredibly kind baristas and friendly locals.  It has a great vibe.

I'll bring my sketchbook and pens, get my large coffee and bagel with pesto cream cheese, and take refuge at a small table drawing.  I carry a small stack of 4x6 photos with me to use as reference.  I flipped through my photos yesterday and just didn't feel excited by any of them.  I looked out the window and found my subject matter... a palm tree, the lifeguard tower, and Newbreak written on the window itself.

I went straight-in with pen for the tree, but wanting to capture the font of the lettering, I opted to first draw the script in pencil and then go in with a pen.  I drew guidelines and then carefully crafted the letters, and once satisfied, I went over each letter with pen.  I added color using my watercolor pan set and water brush.  I felt generally pleased with the result.  Not perfect, but I felt like I captured a moment.

Later in the evening I opened my sketchbook to review my work and my lettering. Oh crap.

Out the Window (Pen and watercolor in Moleskine sketchbook, 5 x 8"). 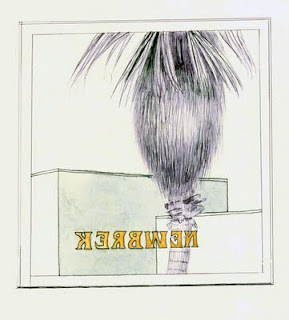 It’s always satisfying having created a good piece of artwork regardless of the medium. However, for me, there’s something especially satisfying if the medium was pen and ink.

There are probably many reasons for this. One is the level of difficulty. Rendering an object and showing its forms using two values and organized scratches is a tremendous challenge. It’s also permanent. There are no do-overs.

I love its aesthetic. Few things look cooler than a good pen and ink drawing.

And there is a minimalism that I relish. It doesn’t get simpler than a pen and piece of paper.

For the majority of my pen and ink drawings, I go straight in with pen. I don’t lay-in with pencil first. I either begin in a spot and work my way out, or do a loose and light contour drawing and then jump around to different areas.

One thing that I find fascinating about seeing other artist’s pen work is that each has a unique approach to rendering forms. I’ve been playing around with different techniques, focusing on edges. To make a piece come alive in drawing and painting, edges play a crucial role. In pen, edges are usually the first to go. I’ve been trying to find a way to maintain these transitions between shapes. It’s tough.

The following two sketchbook drawings were based on photos I took at the Chula Vista Nature Center a few weeks ago. They had a walrus skull on display. Very cool.

Posted by Bryan Tipton at 10:34 PM No comments:

Because Every Illustrator Eventually Draws An Octopus

I’ve joked in still-life painting class that you’re not officially an artist until you’ve painted a pomegranate. There is subject matter that eventually pops-up in every artist’s work. If you walk through enough museums, you’ll see that seemingly, all artists have painted a pomegranate. I’m still waiting to join the pomegranate club, but it will happen. It has to. It’s subject matter that has gravity. A trip to the farmer’s market and blank canvas will see to that.

For illustration, every illustrator will eventually draw an octopus. It’s inevitable. There is something about that creature that lures artists to take pencil to paper. It’s a rite of passage. Finally, I have included it in my oeuvre.

I’ve been dying to draw an octopus for a while, although I wanted to use my own reference. Finding opportunities to take pictures of an octopus proved to be tricky. They’re not like the ubiquitous pigeon. Even in aquarium settings, they tend to be elusive, or so squished into an alcove, that the majesty of their form is not revealed.

Fortunately, a trip to the Chula Vista Nature Center (5 miles south of San Diego) last weekend helped me out. An octopus sat on display in a cylindrical, acrylic case that offered complete visibility around the entire enclosure. The octopus had spread out against one side of the enclosure to eat a crab, providing full, albeit distorted views (due to the curvature of the tank) from the opposite side.

Drawing an octopus creates an interesting challenge from a design standpoint. You have to figure out ways to make the elaborate form apparent and attractive and manage all of those legs to enhance the design. I look forward to creating many more pieces. It becomes its own un-instructed illustration class.
Posted by Bryan Tipton at 11:25 AM No comments:
Newer Posts Older Posts Home
Subscribe to: Posts (Atom)