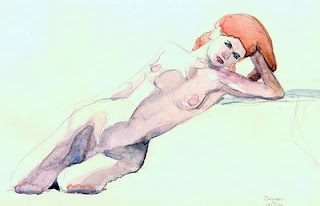 Here are a few pieces I've done at Watts during this Fall term. All paintings measure 9x12" and are oil on canvas board. They were painted from a live model over 2 hours under the guidance of my very talented instructor, and new blogger, Meadow Gist.

One would think that in practicing a trade that there’s a linear progression. You practice and get a little better… practice and get a little better. In math, there’s a data progression known as a step function. Things stay level for a while and then they spontaneously jump to a new level where they stay level for a while. Then it jumps again. It’s not a smooth line, but a stair step. I feel that this resembles what happens to me in art.

I’ll finish a piece of art and compare it to recent works, hoping that I just created something transcendent. With the exception of subtle nuances, it looks technically similar, and I worry about having plateaued. I wonder when the next jump will occur and what will trigger it. But then I work at it, keep an open mind, become engaged, remain inquisitive, observe, and analyze. Eventually something happens that allows me to jump.

Often, the catalyst to making a new jump is simple and silly. Over the last four months, I feel like I’ve made two big progressions.

I was constantly told to paint thick. I knew to paint thick. I dipped my brush deep into each dollop of color and mixed it with others on my glass palette. Yet, for some reason, this effort still didn’t translate into thick paint on my canvas. One day an instructor recommended that I use a palette knife to mix instead of a brush, and voila, thick paint on the canvas. It revolutionized my painting. Applying thick paint makes so many aspects of painting easier and better.

I get into my head too much. I become tentative. I over-think. While painting the portrait of David, I kept scrubbing out massive areas that weren’t working. I applied and removed regions of paint at least three times. I looked at the clock and saw that I had only ten minutes remaining in class. I had the head outline drawn and the eyes and nose complete. Yet the rest was a decimated earth color. I was determined to get the canvas covered. I analyzed and reacted quickly. I worked loosely and made bold marks. I covered eighty percent of the canvas in those waning moments. And most importantly, I liked the result. It’s good to get out of my head and know that I can work instinctively and decisively. It’s helped me relax with later paintings, and reach a new plateau. 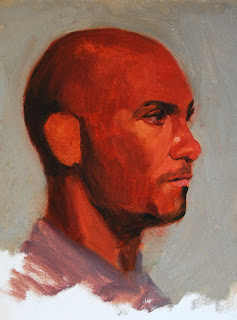 Felicia. The dark cast shadow I made under her eye may be my favorite brushstroke of all time. 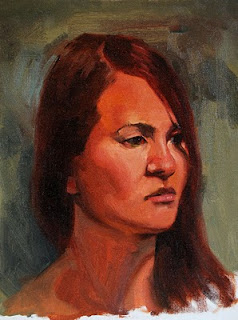 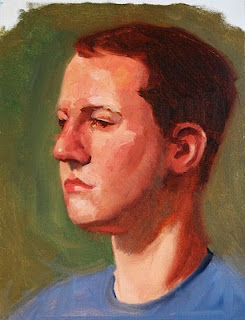 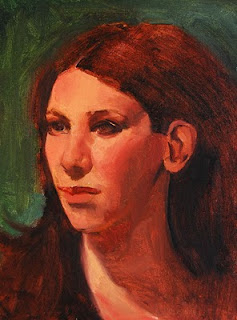