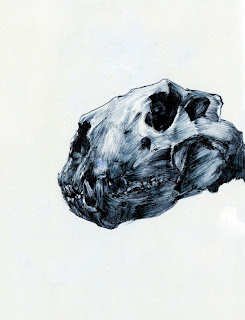 Posted by Bryan Tipton at 7:25 AM No comments:

Sketchbook: She Holds The World In A Paper Cup.

She Holds the World in a Paper Cup (Pencil in Moleskine sketchbook, 4x7"). Study for larger painting. 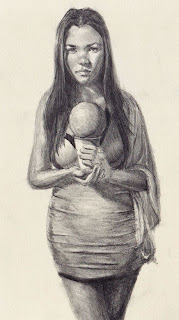 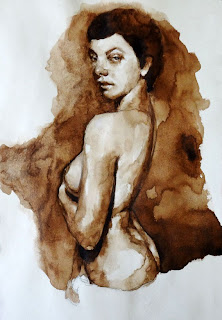 My wife and I traveled to Los Angeles to visit the Page Museum at the La Brea Tarpits and two art museums: the Los Angeles County Museum of Art and The Getty.

Visiting the Getty may have been one of the most amazing art experiences of my life.  I became infatuated with the grounds and the buildings -- wonderfully architect-ed and perched on the hilltop overlooking the city.  The gardens below provided a nice interlude between art-filled pavilions. 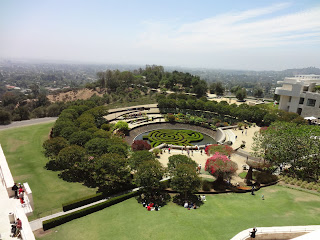 Their collection was astounding and I felt like a school kid on Christmas morning running from one spectacular painting to another.  Many paintings resonated with me and filled me with creative excitement.  I walked into a room and was confronted and the master technique of William-Adolphe Bouguereau and his handling of soft edges while still maintaining structured form.  I marveled at the details Lawrence Alma-Tadema was able to achieve in his painting, Spring, full of dozens of recognizable figures with heads smaller than quarters.  The background was rich but never competed with the foreground.  I found myself once again jealous of Sargent's economy, where he could suggest intricate lace with two brushstrokes.  And of course, there was the wall of instantly recognizable Rembrandt paintings.

There were several new discoveries as well.  I became enamored with a  Degas painting where he used an atypically subdued palette and subject matter. I encountered great and whimsical paintings by Hendrick Ter Brugghen and Joseph Ducreux.

I engaged with many other paintings of wildly varying time frames.  I had a fantastic time.

We entered a special exhibit titled "The Poetry of Paper."  It focused on drawings and ink work where the white space of the paper contributed heavily to the composition and ambiance of the piece.  The first work I saw was Giovanni Battista Tiepolo's, Flight Into Egypt: 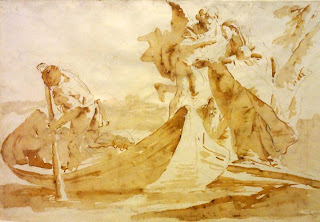 This work, among many others in the exhibit, was created using chalk and brown ink.  I had drawn the picture of Julie (above) in pencil a while ago, but hadn't decided what medium to use for rendering.  Feeling inspired by the exhibit, I came home and painted it using brown (Walnut) ink washes.  I love ink.

While LACMA's collection is extensive, for some reason I don't connect to the paintings.

The Page Museum was fantastic as well.  I went to the University of Colorado where the mascot is a buffalo -- so I'm heavily biased -- but thought the antique bison skeleton was one of the coolest animals there.  The saber-toothed tigers were fantastic and I was in awe of the size of the mammoth.  There is only one word to describe the way the dire wolves were presented: awesome. 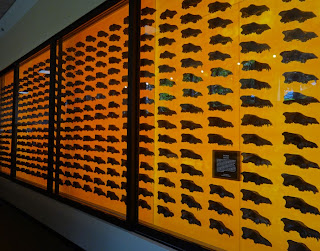 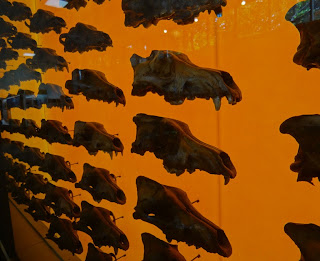