I Don’t Believe In Conspiracy Theories (Except One)

I don’t believe in conspiracy theories. They take too much energy and quickly disintegrate after the first two obvious questions are asked: Who's responsible? What’s the motive?

I’m also not sure what to do with the information and how to assimilate it into my current world view. My life would be needlessly complicated if I had to sustain belief that there was a chance 1 + 1 wasn't actually 2, but instead pi (because the government was behind a mathematical conspiracy against pi and wanted to promote 2 instead).

However, there is one conspiracy that I know to be true. It is one I developed after careful observation and logic. It has a conclusive answer to who and why.

In the urban and beach areas of San Diego, where housing is dense, people rely heavily, if not exclusively, on street parking. And on every street, there is a sign that reads:

My conspiracy theory is this: The existence of street sweepers is a front to enable the city to write tickets for violating the street sweeping parking rules.

Have you ever seen the result of a street sweeper? They do absolutely nothing. They leave behind the same wake of trash and dirt they approached, except now it’s wet.

Their purpose is not to keep the storm drains clear. It rains six inches per year in San Diego. The only areas that flood in San Diego are those streets that have no storm drains or the street concaves below the storm drains’ effectiveness. The street in front of Newbreak Coffee shop in Ocean Beach notoriously floods each time it rains. Every shop along Newport Avenue and Abbott Street has sand bags lining their entrances. And let me say this, all streets are barraged with street sweeper parking signs. If the street sweepers run so frequently and are so effective, why do you need to wear waders to walk across the street?

People that park on these streets have to do the weekly dance of bouncing their cars from one side of the street to the other, often finding the only available spot far away from their residence and having to walk through neighborhoods that are not the safest. In times of desperation, one is apt to leave his or her car parked in a spot that will violate the law when the sun rises, in hopes of waking up before then to move the car. A missed alarm results in a ticket. And what do you do if you go on vacation for a week?

This is the view of the street yesterday morning:

Of course, there’s no need for parking in front of a coffee shop on a Monday morning before work. This morning I had to circle the block twice because there was no parking due to half of it being off-limits.

And both mornings I saw the city worker walking down the line, writing tickets. Often, the street sweeper never arrives. Why does the city have a department called “Storm Water?” Again, it rains six inches a year in San Diego. A hill separates San Diego from the desert.

Why do you rarely see street sweepers in residential areas where there are many more trees, but people park in driveways and garages?

Here is the truly enlightening element of this rule. I have heard from different people that they have watched the street sweeper pass and then parked on the street. They still received a ticket, even after explaining to the person writing the ticket that the sweeper had passed and the ticket writer acknowledging it had gone by. Certainly this violates the spirit of the law, and says something about its intent.
Posted by Bryan Tipton at 9:38 PM 1 comment:

Posted by Bryan Tipton at 6:25 AM No comments:

Posted by Bryan Tipton at 6:41 PM No comments:

To combat my lack of productivity and focus in the evening after a long day of work, I decided to start waking up an hour earlier and begin my mornings at one of my favorite coffee shops drawing.  This has been my routine for the last month and it’s been working well.  I usually bring my own photo reference, but every once in a while, it’s fun to just draw what’s in front of me….
Coffee Shop Chair (Pencil in Moleskine sketchbook, 3.5x5").
Posted by Bryan Tipton at 8:06 PM No comments:

Virginia (Oil on canvas board, 11x14).  I was out of 9x12" boards so I went up to the next size I had available.  I find 9x12" to be a comfortable size to get done in the limited time, but I enjoyed having the extra room to work -- especially getting the shoulders in.  I violated every rule having kept the background white, but I like it.  I'll live with it for a few days before deciding whether to return to it and add color.  It was a good term -- I learned a lot.  Many thanks to my instructor, Ben Young, for all of his help and advice. 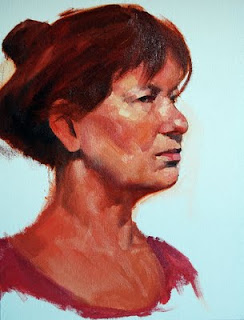 Here are some progress shots -- each taken with my iPhone after a 20 minute session....
﻿ 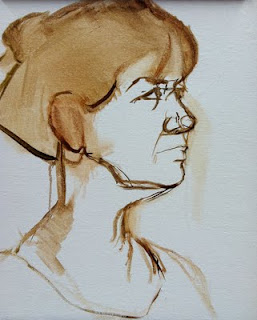 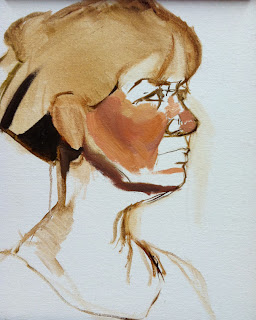 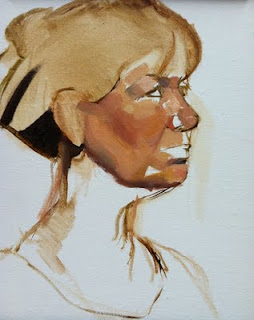 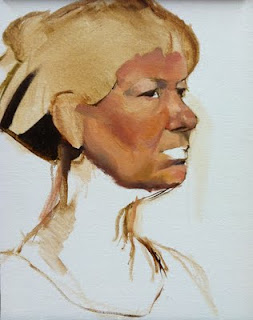 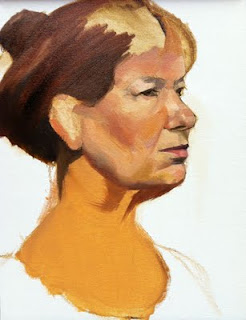 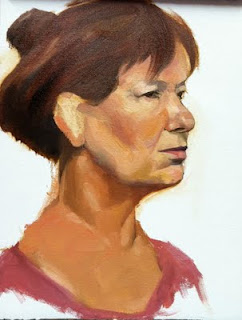 Here are the results from the last two weeks of my portrait painting class at , again conducted under the expert tutelage of my instructor, Ben Young.

Jonah (Oil on canvas board, 9x12").  Painted from live model in around two hours.  This pose had two light sources (one from the top left and another from the right).  These last two weeks I've started a new approach -- laying in thicker and looser tiles -- worrying more about temperature (warm vs cool) than absolute color.  Our model didn't show up, so one of my peers modeled for us.  He did a great job.  Being on the other side of the easel can be a challenge. 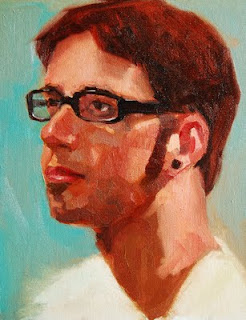 Brian (Oil on canvas board, 9x12"). Painted from live model in around 2 1/2 hours.  I kept trying to get the back of the turban to read in short-hand using quick and loose brushstrokes, but unsatisfied with the results, kept wiping it out.  Eventually, I just ran out of time. 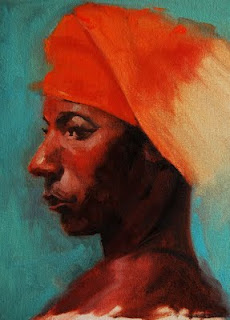