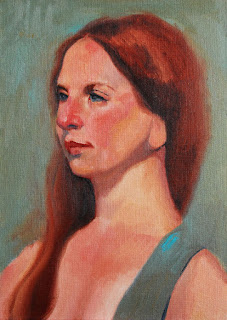 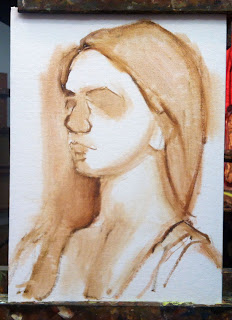 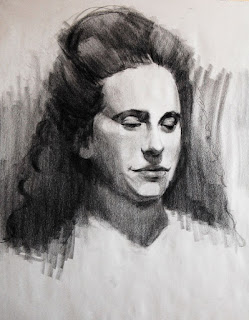 Curly hair is always difficult to render in a short amount of time so I had fun with it, indicating the curls with a few loose, squiggly lines and wavy scribbles.  I'm relearning how to use the Conte 1710B pencil so there is some ramp-up time with that but it's starting to come back to me.  I often have trouble creating an attractive transition shape when the shadow on the side of the face runs into the cast shadow of the neck.  I treat them as two separate shapes.  My instructor, Stan, gave me some great advice when he said to combine them into one shape and fill the entire area with a single value.  Then go back and add nuance to the jaw-line.  That helped a lot.
Posted by Bryan Tipton at 11:02 AM