Art School: Painting From The Masters.

When I was in junior high, I was told that the reason the Russians didn't have a space shuttle program similar to ours was because they couldn't figure out how to manufacture the heat shield tiles.  They had samples and knew what they were made of.  Identified the components.  Understood the composition.  But they couldn't figure out how to actually make them. How do you take all of these parts and put them together in a manner that mimics the original?

This term I'm taking a "Painting From the Masters" class, and I sympathize with the Russian's plight.  I stare at the paintings I'm copying, and I understand the shapes, and can match the colors, but I still can't make it look exactly like the original.  I have to remind myself that my hand is not their hand.  It's been an interesting process in which I've learned a lot.  I've done two paintings thus far, and have tried to select pieces that are outside my normal style, but contain elements I want to adopt into my own repertoire.

I chose William Merritt Chase's, The Spanish Girl, because I like the deep contrast between dark background, hair and clothing, and the fair skin tones.  I picked Richard Schmid's, Sapphire, because the composition is brilliant, and I love Schmid's balance between amazing draftsmanship and looseness.

Study of The Spanish Girl after William Merritt Chase (Oil on canvas, 9x12"). 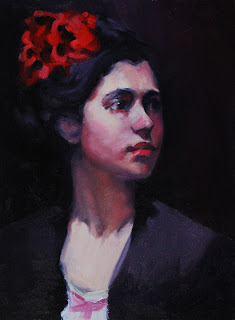 Study of Sapphire after Richard Schmid (Oil on canvas 14x18"). 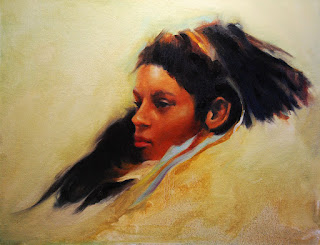